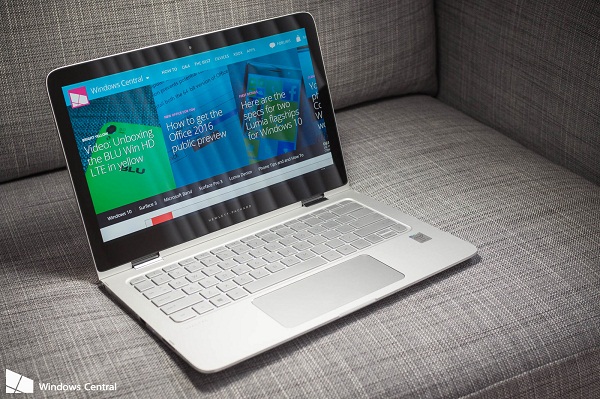 HP is leading more companies to insist on the hybrid format for their ultrabooks. There are many models in its catalog with surname X360, almost all ranges (Stream, Pavilion …) but none can compare to the new Spectre we have analyzed.

The HP Spectre X360 is not only a desirable convertible ultrabook on paper but a model that has the explicit support of Microsoft, which includes in its line Signature Edition but more importantly, has overseen some of the work at the hardware level. The result is about to find out in our full analysis of HP Spectre X360.

Available in different configurations, one with UHD screen that is not sold in all markets, we start our analysis with the technical specifications of the HP Spectre X360 for you to know that we face…

As we will be seeing throughout the analysis, this HP ultrabook model is quite different in some respects to what the company used to offer in the market, starting with the design, the added software and on the negative side, the few configuration options. For an example: The RAM is integrated and the two base configurations available only allow 4 and 8 GB. As the SSD memory, basic models start 128GB and can go up to 512 GB.

Few hybrid ultrabooks have never had a finish like that

The story with hybrids, with few exceptions, has left us ultrabooks models where design or physical dimensions were not something to brag about. With this HP Spectre X360, you should not fear that happen and forget since the beginning of the idea of a hybrid team and made ugly anyway.

The HP Spectre X360 is probably the best hybrid ultrabook finish and design company. Quite a difference, to begin the body of the whole team is metallic, born from a single piece of aluminum and rounded edges where we highlight that accompany the hinges that allow rotation of the screen. That simple detail, very pleasant to the touch, is not random. It is the maxim of the rest of the design of this Spectre, exquisite.

The dimensions of the new ultrabook HP are contained, although with an acceptable thickness, as shown in the table below, is not among the best in the market with the diagonal of 13 inches. But the weight of this 13-inch model is more evident when compared with the best models with the same diagonal. We talk in some cases 300 grams of difference, near 25%.

This excellent initial impression is partially canceled when we pick the team. And this is not only to us. After observing it on the table testing and praise its good workmanship and design, to catch him, our environment is unanimous conclusions: um, weighs more than it appears.

Indeed, the design as Spectre care and rounded forms, suggests that not weigh much but in hand quite noticeable 1.45 kilograms more than the average of Ultrabooks with a 13-inch screen. Moreover, it does not entirely offset that weight, making it impossible to open the lid of the laptop with one hand.

Although apparently it seems that the HP Spectre X360 just wedge thickness is constant, 15.9 mm, but is cut at the front corners to give that feeling while space cattle is used to place two speakers that complement key located at the rear of the lower housing.

Here there is no power problem much less connectivity

In designing the Spectre X360 is no special mention for ports. Here the manufacturer has not stinted and uses thickness to give the buyer an HDMI port, a miniDisplayPort, headphone port and three USB 3.0 ports , one on the left side along with a huge fan of that and talk and groove microSD cards.

On the sides, there is little free space, and HP tops it with the inclusion of the power buttons (left side) and volume control and starts button (right side), all except power with the good tour and metallic finish good line with the rest of the team. It is also a team as Wi-Fi and Bluetooth 4.0. In which a key feature is included to quickly activate airplane mode, curious and practical at the same time.

The placement of the power button and Windows 8 Start at the sides seems a mistake, because where we are really practical is the keyboard part. In the case of an on-off button, no projections or side profile has a different texture, so to hit him must grope blindly around the side.

Inside we can choose between two configurations: with Core i5 / 4GB of RAM and Core i7 / 8GB. In both cases the basic internal memory is 128 GB SSD, the thin-sheet point as nothing more turning on the computer, there are already 40 GB occupied by the system. If we are to have much multimedia content will be insufficient shortly release the equipment, recommended as go for models with Core i7 and 256GB SSD.

Moreover, the configuration possibilities in terms of RAM and processor are those with no possibility of extending the RAM model with Core i5 or improve onboard 8 GB of Core i7. You can only play with the ability of the SSD.

And running with the team reaches the best. The overall performance is splendid for any task that does not involve the need for a dedicated graphics card, as they could be games. Also, read speed of the integrated SSD is high level, above 500 MB/s, but on the other hand, the writing is lower than expected, and not enough in our tests and 120 MB/s, far from the average we expect in a team like this.

Generally speaking, unless you use the computer for editing video or large data transfers, you will not notice much difference in the day. Overall, this Spectre X360 impresses startup time, recovery and off. It is not instantaneous but almost. For example, Windows 8.1 is functional on the home screen in just 6 seconds.

The consideration for wearing inside to a Core i7 is that ventilation must be enabled, in this case on one side, and it is quite strong when the demands of our work demand. But it is not usual, and in the daily work with the browser, image editing, multimedia or office on or not usually does with almost no audible noise. What we making equipment is heated from the bottom, right where the speakers are not excessively but does bother if we put it on our lap.

A few surprises software level, this team is part of the idea of Signature Edition of Microsoft, which aims to market laptops without bloatware and in this case almost succeeded. Added programs are nothing excessive, and are limited to a couple of HP, including the Weather Channel and “fat”, the McAfee antivirus. We are very close to the goal that no more than the operating system software standard, little by little.

By the way, and this is important when you get Windows 10, this equipment can be upgraded without cost , so a new joy that you can take if you opt for it.

The comfortable and travel keyboard is not extinct

Another pleasant experience we have had with Spectre X360 has been when we have put hands on the keyboard. Has metallic finish, the keys are not especially large but comfortable. Touch is very nice and very good tour to stay hours and hours writing without stopping and without fatigue involved.

The touchpad has given us a lime and sand. We think a success that its size is substantial and also in landscape format. Generally, it works well, but we’re not talking about one Precision Touchpad as you would expect but a classic with Synaptics technology, so the answer is correct and point. Joyless! The fingers glide well although we appreciated more resistance than usual in other Windows trackpads.

A large screen that can rotate freely

Although there is a display version UltraHD, in most markets the only choice will be the model with a 1080p screen. Enough for the 13-inch, a decision support in areas such as autonomy but that soon may be a minority option.

The panel is an IPS enough quality. It looks really well, especially with respect to gloss over 300 nits. We are above the average in the segment and that is appreciated in bright environments and when playing video or see images. Precisely in the multimedia section this team HP offers a positive experience thanks to the sound of their built -in speakers, which are located at the bottom of the chassis and are quite powerful.

The panel gives us a very good color reproduction and wide viewing angle enough. This is important in a team in which the screen can be tilted 360 degrees through a system of convenient, reliable and sturdy-looking hinges. We have the option to leave the screen completely above the keyboard, which is deactivated at the time, as a lectern or whatever we want, because the screen is perfectly fixed where we choose.

In the “tablet” mode or the size of the screen or the weight of 1.5 kg facilitates time we want to be playing with Spectre X360. To my left as an anecdotal format, but I appreciate the touch screen. In this model is 10 points, very precise and great complement to the trackpad. For me, it is very comfortable to wear the finger directly to the screen, especially with Windows 8.

No sacrifices no reward: Excellent autonomy

If you saw the table above where the weight of the HP Spectre X360 with some of its rivals comparing the difference with them was considerable, the main reason is simple: a huge battery of 56 Wh.

With such beast as battery autonomy, it is excellent, especially when considering the range of convertible ultrabooks in recent years. HP enacts its Spectre can reach 12.5 hours of battery life and have managed to reproduce almost. In multimedia mode, we can easily exceed the 10 hours of video with 50% brightness and wireless off.

If we stick to a more common and varied use, connectivity, brightness and more demanding applications such as the browser with more than 10 tabs open, we can wait quietly a full day’s work outside the charger. Between 8 and 9 actual working hours have measured in intensive sessions to which we have subjected the equipment, travel involved, in the 3 weeks, we have been discussing in detail the product.

Although I try many computers with Windows for my job, on a day to day I usually find myself surrounded by a desktop and a laptop (Macbook Pro Retina) Mac. And I do not usually have many temptations in the form of ultrabooks with Windows as a one is undoubtedly the Spectre X360 HP has set for this 2015.

With this ultrabook we can finally say that, from a not very high price, HP has created a ultrabook with touch screen that is attractive, well finished and functional, especially on the touch screen and the balance between performance and great battery, although alternative views of the market, is a little heavy for what we would have liked.

But if I have to meet with a look that has conquered me, it would be the keyboard. A great joy to see that there is still room to think of the laptop as a team that we want to use the keyboard productively and travel and touch the Spectre X360 integrates not disappoint.