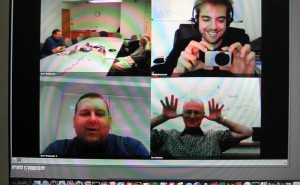 Facebook is, by far, the world’s largest social network. Because it has primarily been used for social purposes (though businesses are now getting in on the act), many believe there would be no need for social enhancement through this wildly popular social medium. Well, in comes a brand-new Facebook application designed to prove those beliefs totally wrong.

Airtime, the new social video platform launched on Tuesday, is effectively the marriage between video chat and Facebook. You see, the application pairs you with others who have expressed similar interests based on their Facebook interest graph. Video connections take place using the webcam software built in to most modern laptops and personal computers. Unlike Facebook, you’re connected only by having similar interests, and those with whom you connect via Airtime may or may not be people you already know. While the description of this software may bring Skype to mind, one significant difference between the two is that Airtime doesn’t require users to download the software onto their personal computers. Airtime is the brainchild of Sean Parker (who helped start Facebook and Spotify) and Shawn Manning of Napster fame.

Probably the simplest and easiest to use, On Conference is a Facebook chat application allowing users to participate in a text, audio or video conversation together. This application provides users a unique URL to be used for their conversations; however, the application is void of special design features that can, at times, prove confusing. OnConference is traditionally a conference call provider, so they bring years of experience to the table in their app.

Equally as simple to use as On Conference, Friend Cameo allows you to interact only with your closest friends and family members. It, too, is devoid of confusing designs and menus, but some users may become annoyed with the constant pop-up box requesting a rating for the application from its users.

360 Mate is the peer-to-peer text audio, video or chat application that can be used to converse with friends or complete strangers, publicly or privately. This application environment is very easy to use, and interestingly enough, public and private conversations can take place simultaneously on 360 Mate.

Among the simplest and most popular Facebook applications, Rounds effectively simulates the two-way environment, allowing users to feel that they are in the same room with the person they are chatting with. The speed of this application is similar to two or more users engaged in conversation via a video VoIP software application, but again, there’s no need to download Rounds software onto your laptop or PC. Chatting via Rounds is mostly live video and voice feeds, and the application features a familiar interface that underscores its ease of use.

Though many have become familiar and comfortable with Skype, some have expressed concerns over its recent acquisition by Microsoft. It does, however, remain an easy, effective, mobile-friendly video chat platform despite the rise in paid features and Microsoft’s influence. But for those who want an alternative, the previous, download-free software may be just what you’re looking for.