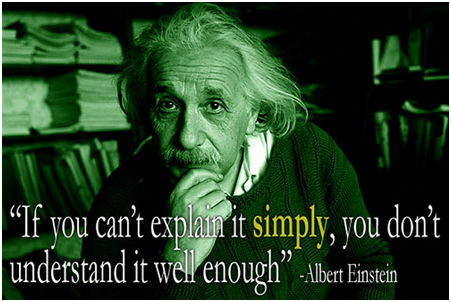 Einstein is heralded as one of the true geniuses of the twentieth century and of all time. However, you may be surprised at quite how many things he is responsible for inventing or discovering.

The Explanation for Brownian Motion

Anybody who has read The Hitchhiker’s Guide to the Galaxy is familiar with Brownian motion. The term refers to the random movements of particles suspended in a fluid, discovered by Robert Brown in 1827. The phenomenon was long unexplained, but Einstein realised that it was due to thermal molecular motion.

A look at the range on offer from any retailer, will show that there are now countless fridge freezers available. In 1926, however, they were rarer. They also relied on potentially dangerous gases. Inspired by a poisoning case, Einstein and fellow scientist Leo Szilard invented a fridge that used safer alcohol gas.

The Reason the Sky is Blue

Einstein was also the first to completely explain in detail the phenomenon that makes the sky blue. Einstein’s theory, that molecules in the atmosphere scattered light in such a way as to create the blue colour, was soon backed up by experimentation and became accepted.

A State of Matter

Every schoolchild can tell you that there are three states of matter: solid, liquid and gas. This just goes to show schoolchildren are not authorities on the subject. There are actually at least seven states of matter, and probably more (definitions are still being debated). One of these, Bose-Einstein Condensate, was the discovery of Einstein.

The Idea of Photons

Previously, it had been assumed that light was just a series of waves, much like radio waves. Einstein, however, suggested that it was in fact made up of energy particles called photons. This is now known to be true and affects the way we understand light massively.

The discovery of photons was a by-product of this discovery. Previously, it was believed that the amount of energy emitted by a substance when exposed to light was proportional to the light’s intensity. Einstein noticed that substances gave off more electrons, but these did not contain more energy, and so he formed an alternative, now-accepted theory.

A Novel Way to Propose Marriage

After his first marriage ended, Einstein became enamoured with a new woman who would eventually become his second wife. Interestingly, he also became enamoured with her daughter. The way he dealt with this was to propose to both simultaneously and let them decide which, if either, should accept.  Imagine the wedding party?  You’d need a pretty big venue to keep them apart we think!  Like Taunton Venue Hire http://www.countygroundtaunton.co.uk/venue-hire/dinners-parties/ .

Einstein’s contributions to science were many and wonderful. His one contribution to the fashion world is somewhat more questionable. Einstein never wore socks, and advocated this approach to footwear as a superior one.