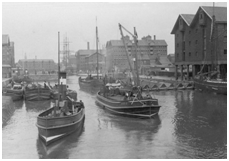 With its position at the mouth of the River Severn the city of Gloucester was always going to flourish with it’s docks so busy and taking in trade. It was the main point of feeding out to Canals throughout the area the flow of gods and material meant that this bustling city was a great draw of people. It remains that today and Gloucester Sales and Lettings are always an important and busy factor in the city. If you’re looking for somewhere in Gloucester then try Alex Clark Glos now part of TGRES as a start point.

The most striking thing about the docks is the main basin, still used by canal boats today. There was so much scope for trade that it was thought it might not be big enough. There was still trade and business coming in from sea going ships, so a separate area was built for them. The canal was opened on in eighteen twenty-seven to a great fanfare and the gathered crowd cheered as the gun salute was sounded and the bells of local churches rang an appeal.

Gloucester docks undercut Bristol for its fees to unload so soon companies were avoiding the larger dock for the smaller local one. It also meant they didn’t have to worry about land shipments. This was particular true for the coal and iron ore plus iron that was coming out of the Forest of Dean as the well. The biggest was the salt gained from inland Worcester, this was brought down by the canal network quickly and efficiently. That was the export side on the import side the city saw trades for the Americas with wood for building, Corn grown in Ireland as the Welsh ports were avoid because moving that overland was very prohibitive and wines and sherry from France and Portugal. The cities trade was so brisk it became clear that more space was needed, and you can see the warehouses that were built up to cope to this day. More quays were added but the water was easy to find due to the cities close proximity to the River Severn. It was an easy job to pump more in.

Corn became cheaper and more was imported so the Victoria Dock was constructed in the eighteen forties to cope with the increased influx. More importantly the Railways were coming. They were rapidly overtaking the canal boat system for the movement of goods and a direct rail route was set up to connect with the branch line.

The world was changing and still the imports were coming in, but the docks were slowly starting to be to small to take the large ships. A new dock in Shrapness was opened and more was taken in that way. Much of the trade traffic was by barge now up form Bristol. What put ships coming in off though was that only the salt from Worcester was going out. A ship could not fill up going back out.